MOTIVATION AND THEORIES OF MOTIVATION 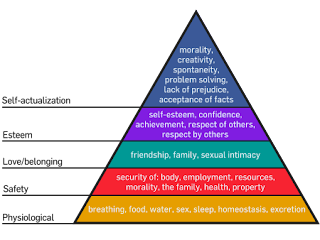 Motivating staff for the best performance possible is a matter of finding the right drivers that interest them and reinforcing those drivers while providing negative reinforcement on other, unwanted behaviors.  There are two main types of theories to motivate employees – the content theory (motivation is internally based on employee needs and wants) and process theory (external factors that can be used to influence employee behavior).
Two of the most famous content theories are Maslow’s hierarchy (as shown above) and Herzberg’s two-factor theory.  Maslow’s theory proposes that lower order (physiological) needs must be satisfied before higher order (psychological) needs can be considered.  Herzberg’s theory falls in between Maslow’s and other process theories and states that one set of factors causes motivation and satisfaction (content factors) and another set is responsible for dissatisfaction and low motivation (hygiene factors).
Process theories of motivation are primarily split up into Expectancy and Equity theories.  Expectancy theory focuses on the relationship between effort, performance, and rewards and as the name states, rests on expectations, instrumentality, and valence.  Equity theory is very much a match to the name – with equity theory, the employee is basically comparing themselves against others and depending upon that comparison choosing to be motivated or demotivated.
Behavior modification (BMod) specifies the crucial role of the environment in shaping behavior and states that behavior is a function of its consequences.  With BMod positive and negative reinforcement strengthen behavior, and punishment and extinction weaken behavior.  Reinforcers can be either fixed or variable and the delivery can be either at a fixed interval or at some defined ratio. Partial reinforcement schedules have powerful effects on behavior.  By changing the ratio‘s of reinforcement, positive behaviors can be strengthened.  This is known as behavioral shaping and is a very powerful tool.
The following two tabs change content below.

STOP PLACING THE BURDEN FOR GOOD CX ON YOUR CUSTOMERS﻿

This post was originally published on CX Expert. It has been updated to reflect current market trends and new research. What do you understand by customer experience? My understanding... Read More

How to Build a NOC

This post was initially published on CX Expert. It has been updated and refreshed before being republished here. A network operations center (NOC) is the central point of monitoring... Read More

Time Management is generally assumed to refer to the development of processes and tools that increase productivity and efficiency. However, this does not always have to be the case.... Read More

Regardless of if you spell it Behavior or Behaviour, Managers need to understand what makes their teams “tick”. With the internet continually forcing businesses globally to become ever more... Read More