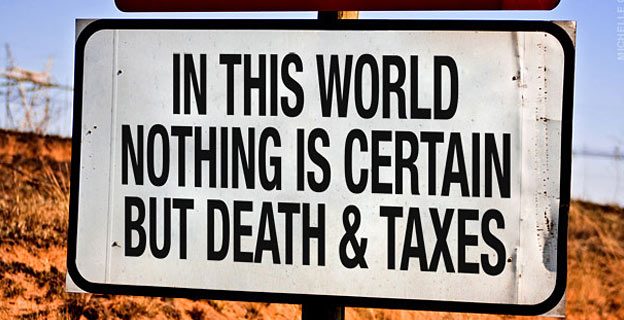 As much as you’d like your team to work for free and to have the highest quality staff at the lowest possible prices … it will never happen.  You might tell yourself that you’re doing what you’re doing because you love the job and the company that you work for and that your staff and employees should feel the same – but – let’s be honest … you and your team are doing it for the money.  You probably have a family that you are looking after, and if not, you’re doing this because you have your own personal interests that you wish to pursue.

Now with that being said … the one fact of life that we can never get away from is tax.  Unless you live in a part of the world that provides tax-free income, you are just like the rest of us giving away 30% – 50% (or even more!) of everything you earn to the Government.
Remember the famous phrase from Benjamin Franklin in his letter to Jean-Baptiste Leroy, 1789, which was reprinted in The Works of Benjamin Franklin, 1817:

“‘In this world nothing can be said to be certain, except death and taxes.”

Despite the frustration, you might feel about this, there really isn’t too much you can do to resolve this situation.  All you can do is hope to continually grow your gross income so that the tiny amount you get to pay all your bills with at the end of the month increases by another small fraction.
Well, guess what … the British Government has now introduced a new tax on phone lines.  This tax is designed to fund the expansion of broadband services across the country and improve the overall infrastructure of next-generation services.  At first glance, this small extra tax (at £6/year – approx US$10 per year) does not seem like such a big deal and makes sense as you need a phone line to have Internet services – right????
Actually WRONG!!!  The stupid thing that has obviously not been considered and thought through properly is the fact that a large proportion of current Broadband Internet AND Telephone users in Britain utilize a Cable service … so in essence, the people using the greatest amount of service and access are the ones that WON’T have to pay for it!!  In addition, there are millions of Britain’s that don’t even have a computer yet and they will still have to pay for this tax also!

Now, there is obviously not too much you can do to change the overall taxation system of the country that you work with/in (although it is definitely true that even a small voice speaking loudly and with conviction makes a difference) … you can, however, ensure that the way your staff are treated and compensated is in their best interests and works to their favor.  Make sure that if they work out of hours they get paid for it.  If they do extra work for the company they get the appropriate compensation and if they are entitled to a holiday – they take it!  You need to look out for your team and if you do it right and do it regularly they will look out for you too!